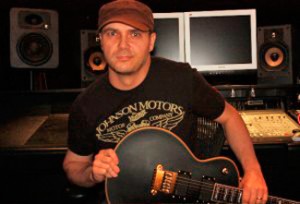 “If you’re as crazy about being in tune as I am, you need to get one of these. Concentrate on the important stuff, being creative, performing, playing compelling parts, and forget about tuning rash that has been inherent in guitars until now.”

Sean McDonald has been making music since he picked up a guitar at the age of 12.

He then split time between being a high school student, and drumming with one of Pittsburgh’s punk rock pioneers, No Shelter, featuring front man John Creighton. Sean then left Pittsburgh, as a touring musician, playing everywhere…anywhere.

Every conceivable style of music, in every imaginable venue. It was those years, and those experiences, that would become a valuable foundation for his next career as a songwriter and producer. He returned home to form Sofa King Music Services, a full service production company, specializing in producing recording artists, as well as live concert recording and post production for radio and TV.

Partial list of artists Sean has produced, recorded, or mixed: